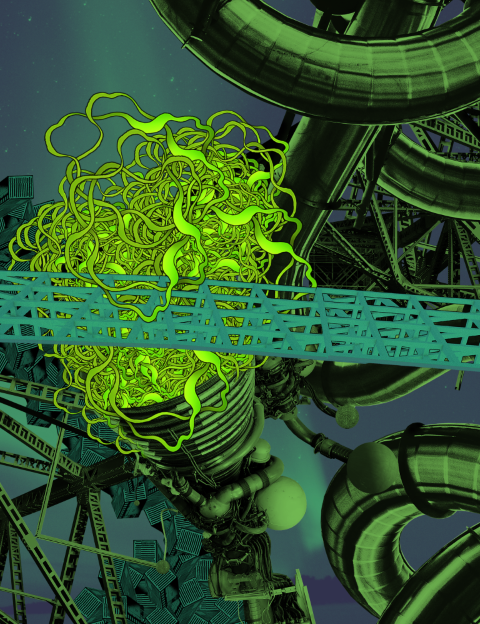 The meeting will be simultaneously translated into Polish.

Strengthening of the relationships between Polish and Russian theatre artists started at the beginning of the new millennium. We started to become curious about, and to examine each other. The language of the new Polish theatre was constructed by directors, while the new Russian theatre was based on new dramas. Polish theatre drew liberally from the experiences of drama laboratories in Russia and Russian state dramas, while the Russians learnt new forms from Polish theatre. The Season of Polish Culture in Russia organised by the Adam Mickiewicz Institute in 2008 was an opportunity for a wider Russian audience to meet Polish theatre, and also an opportunity to learn about the new Polish dramathat had made itself at home on Russian stages. Another opportunity came in 2011, with the festival of Polish theatre co-organised by the Institute and the Golden Mask. That was when Russian theatre came to a boiling point, and young directors began to follow the Poles in an endeavour to work like Lupa and Warlikowski. The media discussed the festival for over a year. The Da! Da! Da! Festival was organised in Warsaw in 2013, as a kind of rematch. Later, Polish directors began to work on the prestigious stages of Moscow and Russian directors arrived in Polish theatres. A few years ago, this close cooperation stalled and contacts were severed. The Russians know nothing about the new trends in Polish theatre, nor do they know the names of the new directors and playwrights. Poles, in turn, only have minimal contact with Russian theatre. For this reason, the meeting during this year’s Boska Komedia / Divine Comedy festival will be an extraordinary opportunity to rebuild the relationship. The Polish side will present many new productions to the Russian guests, and our guests will be invited to talk to the Polish audience about the new trends in the dynamically developing Russian theatre and drama scene, as well as the political and social situation and its impact on the theatre institutions and the artists themselves.

The Constitution of the Russian Federation states that the country guarantees freedom of artistic expression, unlike in the USSR where censorship was official but contrary to expectation, artists found it easier. Why? Clearly defined rules were in operation and you could “play” around them and negotiate with the censor. Now there are no specific prohibitions. The directors, artistic and administrative alike, decide to what degree they are free. In such circumstances you never know when and why a scandal will break out. Sometimes, critical political statements pass entirely unnoticed. Sometimes, even delicate ones don’t. A good example is the recent scandal in the Moscow Sovremennik Theatre, where Beniamin Koc, a Polish director, brought a play by Rinat Tashimov, a young Tatar playwright (a student of Nikolay Kolyada) to the stage. The play Первый хлеб (First Bread) was written several years ago and has been read and performed in a large number of provincial theatres. After the Moscow premiere, the central authorities suddenly received a complaint from the Officers of Russia denouncing the production for allegedly spitting on the souls of veterans. The situation became surreal: investigations began, and one of the community consultants operating at the Ministry of Culture – the great-great-grandson of the great romanticist Mikhail Lermontov who was also called Mikhail Lermontov – ordered an investigation into all theatres of the country on the pretext of checking for the use of subversive words/thoughts in the productions. Luckily, the new minister of culture, Olga Lubimova, did not support the idea. However, the actors participating in the Moscow production are still being interrogated.

As aesthetics have always been intertwined with politics in Russia, a certain aesthetic normalcy developed. Civil servants have their idea of what art should be like: it comprises realism, beauty, and good. If an artist fits that aesthetic pigeonhole they can allow themselves to share more in the message. Conventional art is politically acceptable art. That is why Knyaz (Prince), which was based on The Idiot by Dostoevsky and directed by Konstantin Bogomolov, and addressed no political questions but was aesthetically “difficult” – caused a scandal, and the management of the Lenkom Theatre in Moscow had to take it off the bill.

It is worth quoting a bon mot by a great Russian prose writer, Sergei Dovlatov who said: “Who wrote four million denunciations? (…) It was ordinary Soviet citizens”. The current powers-that-be have given their consent and let the denunciations flow. They are the work of associations of veterans, officers, orthodox families, and regular members of the audience who are just expressing their anxiety. Often they do it on the behest of some of the team who may be dissatisfied, for example, with the new management of the theatre.

An outrage was recently caused by a young director’s sketch for a play based on Dostoevsky’s Crime and Punishment. It referred to an event in Kazan, the capital of Tatarstan, where a school graduate massacred teachers and students for the wrongs he had experienced earlier. A group of “the anxious” pronounced the production “a propaganda of violence” and denounced it to the Ministry of Defence.

On the other hand, the decentralisation of the theatrical process in Russia has done a lot of good. Drama and directing labs and masterclasses take place in all the regional cities and towns. Never before in the history of the Russian theatre has such excitement been observed in provincial theatre. It can be considered a theatre-centred opposition to the regime at a time when a great surge in cultural life is taking place in defiance of a profound countrywide depression.

Everything depends on the local civil servants. In Russia, well-equipped theatres operate even in small towns as the civil authorities were eager to build them as an element of support for the ideology. Today, the artists working in those centres have plenty of freedom. Young directors keep searching for their language and reach for new types of drama. That is where theatre blossoms.

Hence the paradox: previously, the new trends and new texts flowed from the centre (the theatres of Moscow and St Petersburg) to the provinces, but now the situation has reversed and the texts that have passed muster in the provinces make it to the capital’s stages. The provinces are also strong in organising festivals: both international and regional, which allow the exchange of ideas and give birth to new projects. This greatly stimulates regional theatrical life. Interestingly, a large number of new theatre schools have recently opened in large cities as well as in small towns.

We would like to discuss all these subjects with our Russian guests.